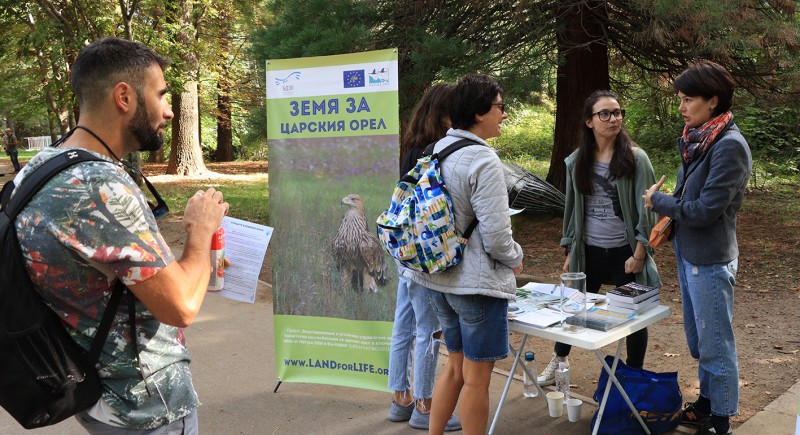 The EuroBirdwatch20 took place on the weekend of 3 and 4 October 2020. Altogether 36 BirdLife Partners participated in the biggest birdwatching event of the BirdLlife Partnership during the year. More than 1700 events were organized with 24 000 participants and 6 Million observed birds.

Nearly 500 people took part in the EuroBirdwatch20 in Bulgaria, who attended the events organized by the Bulgarian Society for the Protection of Birds (BSPB) in Sofia, Varna, Burgas, Haskovo, Gotse Delchev, and Svishtov. The participants observed birds, learned interesting facts about their migration, visited some of our stands with information materials, and participated in various games and workshops for making feeders and nests. The total number of observed birds in our country was 30,273 individuals of over 100 species. The coordinator of the EuroBirdwatch20 in Bulgaria is BSPB.

A team of the "LAND for LIFE" project also took part in the event in the South Park in Sofia. More than 70 people visited our stand, and during the bird watching tours, nearly 180 birds of 24 species were observed. The participants learned interesting facts about rare species found in our country, including the Imperial Eagle, the Egyptian Vulture, and the Red-breasted Goose.

The three most frequently observed bird species during the events in Bulgaria are the Common Starling, the Common Buzzard, and the Mallard. Of the rare and endangered species, the following were observed: Dalmatian Pelicans, Imperial Eagle, Ferruginous Ducks, Common Pochard, White-headed Duck, Imperial Eagle, Lesser Spotted Eagles, White-tailed Eagle, etc.
The three most numerous bird species observed during the event in all participating countries are Barnacle Goose, the Common Starling, and the Chaffinch.

EuroBirdwatch is one of the largest international events, organized since 1993, and in 26 years it has been attended by more than 1 million people who have observed more than 75 million birds. The main purpose of this 27-year tradition is to raise awareness of one of the most dangerous events in the life of the birds - their migration, which is accompanied by countless threatening factors.