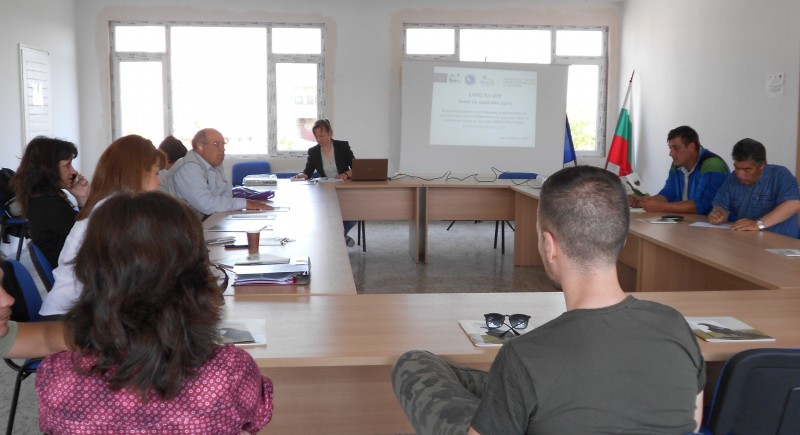 55 farmers participated in information meetings organized by the Bulgarian Society for the Protection of Birds (BSPB) in Yambol, Bolyarovo, Sredets, Sliven and Elhovo. The aim of the meetings was to present the new "Guide for Sustainable Management of Grasslands in Habitat of the Imperial Eagle in Key Areas of "Natura 2000" in Bulgaria", as well as to explain the measure 10 "Agroecology and Climate" and Measure 12 " Natura 2000 payments" for this year. Experts from State Fund Agriculture - Sofia, Regional Directorate of Agriculture - Yambol and Sliven, Municipal Agriculture Office - Bolyarovo and Elhovo, as well as experts from Sredets Municipality participated on the meetings.

The guide was created within the LIFE Project "Land for Life" with the expert assistance of the State Fund Agriculture - Paying Agency.

During the meetings the most frequent questions of farmers were related to the permanent crops they applied for under different agri-environmental directions as well as to Measure 12 "Natura 2000 payments". The banning regimes of the Natura 2000 ecological sites and the difficulties in managing the pastures in them were discussed.

Positive feedback on the usefulness of the guide was received by the Regional Directorates of Agriculture and Regional Paying Agencies in Yambol and Sliven who attended the meetings. A number of consultations and inquiries on measures 10 and 12 were held during the meeting in Elhovo.

In Bolyarovo, it was demonstrated to farmers how to perform a site field inspection to show the permissible / inadmissible elements of the landscape. Experts of the project, jointly with State Fund Agriculture, visited agricultural plots, turned into permanently planted areas under agri-ecological activity for the Imperial eagle in the region of Yambol. These pastures with a total area of more than 900 decares are successfully managed for the fifth consecutive year in favor of the Imperial Eagle and other raptors.

BSPB organized the meetings within the project "Land for Life", funded under the LIFE Programme of the European Union.