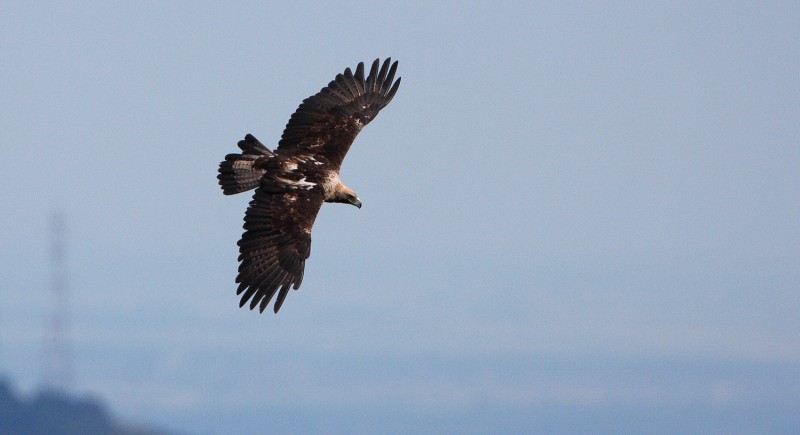 At the beginning of March, a team of the Bulgarian Society for the Protection of Birds (BSPB) has discovered three new pairs of the globally endangered Imperial Eagle in the area of ​​Sliven, Bulgaria. With them, the number of all pairs in the country has grown from 29 to 32, a record for the last 20 years. By comparison, in 2000, when active conservation activities began, the number of all known nests was only seven.

With them, the population of the species in the region of Sliven grew from five to eight pairs, making the area the second most important breeding ground for the Imperial Eagle after Sakar Special Protection Area, which shelters ten pairs.

In the period 2013 - 2018 Elektrorazpredelenie Yug (part of EVN) and BSPB implemented the LIFE project "Life for Safe Grid". Within the project, 2 340 electric poles were insulated, 42 km of air power lines, which represent 126 km of conductors, were replaced with completely insulated ones - the so-called PAS system. 43 km of underground electrical cables have been laid, replacing nearly 70 km of hazardous powerlines.

Until recently, the main threat to young Imperial eagles was the death from contact with wires when landing on unsecured electric poles. This threat has been eliminated in most of the important for the species areas thanks to the LIFE project "Life for Safe Grid". The number of Imperial eagles in the region of Sliven has increased almost threefold in the last eight years - from three pairs before the isolation of eight today, which is a direct result of the project's conservation activities.

The new pairs were discovered by the BSPB expert in the conservation of birds of prey - Dr. Dimitar Demerdzhiev and the local BSPB collaborator Valentin Velev. At the end of last year's breeding season, they noticed indications for the breeding of new pairs in the area and during the monitoring early this season the doubts were confirmed. The birds are currently repairing their nests, and the monitoring of the other pairs is ongoing.

The regular monitoring of the breeding pairs of Imperial Eagles in Bulgaria is part of the conservation activities under the LIFE project "LAND for LIFE" to improve the breeding and foraging habitats of the species.