Good breeding success for the Imperial eagles in Thrace 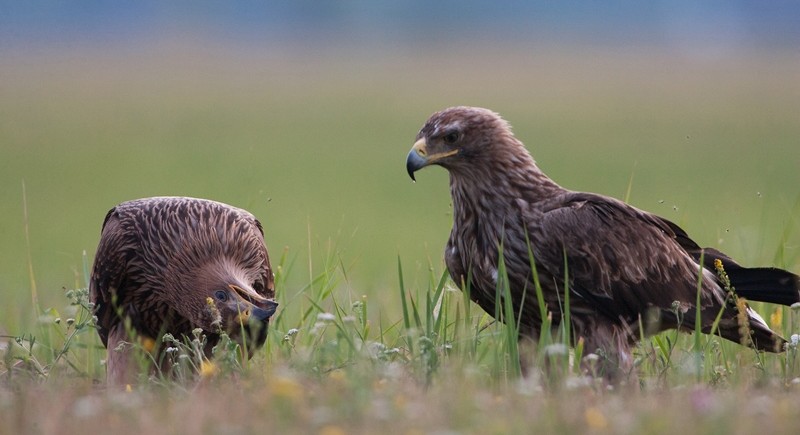 2019 will be remembered with the good breeding success of the Imperial eagles in Thrace. The Thracian subpopulation of the species comprises all breeding pairs in Bulgaria and those in European Turkey. This year the number of pairs in Bulgaria is again 29, as the previous year. In European Turkey, the number of occupied territories is 38, but their number is probably higher as the status of some of the territories remains unclear and more visits are needed.

In Bulgaria, 19 pairs started incubation and raised 26 juveniles. The total number of pairs of Imperial eagles in Thrace probably already exceeds 100. Last year, it was between 80 and 90. The newly discovered pair on the Dardanelles could be a bridge between the Thracian population and the Asia Minor population.

The high values of the breeding success of the Imperial Eagle in European Turkey (1.56 juveniles for a breeding pair) and Bulgaria (1.37 juveniles for a breeding pair) are due both to the conservation activities applied to the species in Bulgaria and Turkey, as well as to favorable natural factors during this year. Most of the pairs had two or three juveniles. The conservation activities carried out by the BSPB within the framework of the LIFE project “LAND for LIFE” include monitoring the demographic parameters of the population, improving the foraging and breeding habitats, through afforestation, reintroduction of the European Souslik, maintaining the grasslands in optimal condition and restoring already plowed pastures, installation of artificial nests, and raising public awareness of the importance of protecting the Imperial Eagle. In 2019, the BSPB also provided nest guarding of part of the risky nests. The isolation of hazardous electric poles in the areas with Imperial eagles in Bulgaria has also contributed to the reduction of deaths from electric shocks, which mostly affected young individuals.

The monitoring data show that in recent years breeding success has remained high and above the average for the entire Thracian subpopulation of the species in Bulgaria and Turkey. However, the impression is that while the Imperial Eagles in European Turkey do not stop increasing, in Bulgaria after 2015 the population growth stopped and for the period 2015-2019 it grew by only one couple. The fact that after 2015 the number of the pairs in Bulgaria who have started incubation is decreasing is also worrying, with only 19 being reported this year - as many as in the distant 2012. The reasons for this phenomenon are complex: (1) The habitats of the species over the last five years have been massively destroyed; (2) the incidence of replacement partners in pairs is increasing, indicating increasing mortality among breeding birds. In 2019, again, a high percentage of exchanged partners in pairs was reported - 14.81%, after the peak in 2017 - 16.67%. Thus, after 2015, the average percentage of exchanged partners in pairs is 10.18%, which is too high. For comparison, between 2000 and 2014, the average percentage of exchanged partners was 6.93%. All this has both a direct and indirect effect on the demographics of the species. And last but not least, in many places, wolves have returned after more than a decade of absence. The damage they inflict on breeders increases tensions and creates a situation for the use of unregulated poison baits, which also affect birds of prey such as the Imperial Eagle and the Vultures.