BSPB film dedicated to the resettling of the European souslik 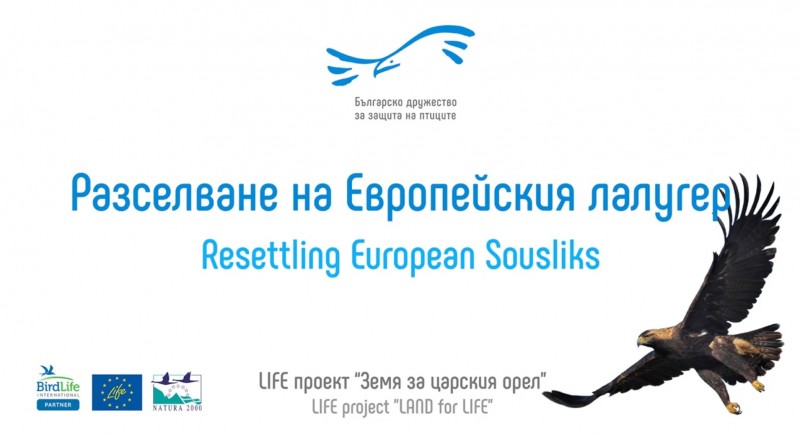 The destruction of the habitats of the European souslik is the main reason why the species is endangered, having already become completely extinct in Germany, Croatia, and Poland. A large part of its colonies in Bulgaria is also in danger. Its survival is directly related to the survival of a number of other endangered species such as the Imperial Eagle, as it is a major food resource.

The rescue of even just one of Souslik’s colony requires the efforts of many participants - nature conservation organizations, experts, farmers, as well as the implementation of innovative measures and approaches. The film "Resettling European Sousliks", created within the LIFE project "LAND for LIFE", is dedicated to this.

From 2017 to 2019, in the last remaining colony of the European souslik in the Natura 2000 area “Zapadna Strandzha,” a total of 213 Sousliks were resettled, taken from a colony near Sliven, which is highly endangered due to the plowing of pastures in the area. By capturing and freeing the new place, the Sousliks are given a better chance of survival. Radio transmitters were installed on 42 individuals to track their movements and behavior in the new territory. Within the project, for the first time in Bulgaria, radio collars were installed. The results of radio telemetry help to study the behavior and adaptation of the Sousliks. As a result of this activity, the species in Zapadna Strandza increased their numbers, and thus the last colony of the species in the region was preserved. This also gives a better chance for the survival of their neighbors - the Imperial Eagles.

See more in the video.

The activities on reinforcing the colony of European sousliks in Zapadna Strandzha Special Protection Area are carried out by Dr. Yordan Koshev (from IBEI - BAS), who is also the leader of the activities on the protection of the Souslik within the BSPB LIFE project "LAND for LIFE" and Maria Kachamakova , who is a Ph.D. student at IBEI - BAS and a collaborator on the project.