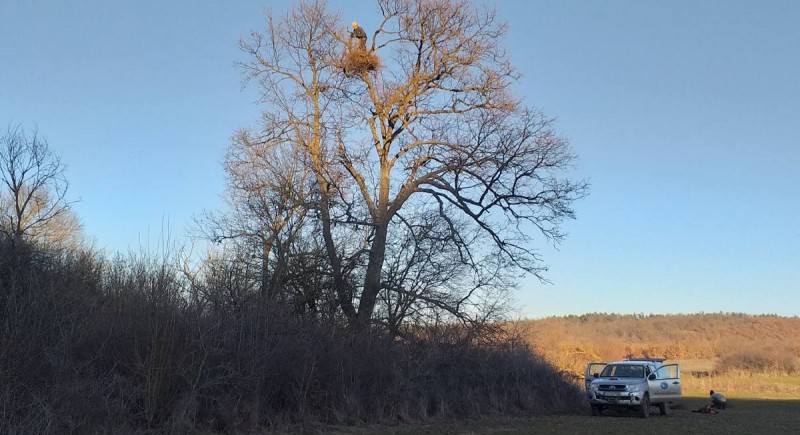 At the end of last year, the team of the LIFE Project “LAND for LIFE” completed the installation of all 40 artificial nests provided under the project. All of them are located in or near Special Protection Areas, part of Natura 2000, which are key to the conservation of the species - Sakar, Derventski vazvishenia, Zapadna Strandzha, Adata – Tundzha, Kamenski Bair and Sinite kamani – Grebenets. The purpose of their installation is to encourage young pairs of eagles to breed in unoccupied territories, or to help breeding pairs to select a safe nest.

About 20% of the artificial nests become home to Imperial eagles. This is one of the most effective conservation measures, as building a new nest is a difficult and energy-consuming task, especially for young pairs of Imperial Eagles. In March, a new pair chose such a nest for their home. Thus, a total of 4 artificial nests built under the project have so far been occupied by new pairs of Imperial Eagles.

When installing the artificial nest, the first step is to carefully select the right tree and territory. The place must be away from another pairs' territory, from dangerous power lines and sources of disturbance such as roads, and close to food resources. Ideally, floaters will be observed in the territory. The tree should be tall and stable.

It takes about a day to install a nest. The base of a wheel-shaped branch is mounted on a tree using an alpine technique. More branches are added to make it massive and solid. It reaches a diameter of 1.5 to 2 meters, thickness up to 2 m and sometimes weighs about 200 kg. It has been used by eagles sometimes for decades. The most appropriate time for the installation of an artificial nest is the end of autumn and the beginning of winter so that in winter or early spring the eagles can occupy and finish them.

The installation of artificial nests is an important part of the conservation activities under the project to improve the breeding and foraging habitats of the species. We recall that in the previous BSPB LIFE project "Conservation of Imperial Eagle and Saker Falcon in key Natura 2000 sites in Bulgaria" were placed 40 artificial nests, 10 of them being occupied by Imperial eagles over the years.