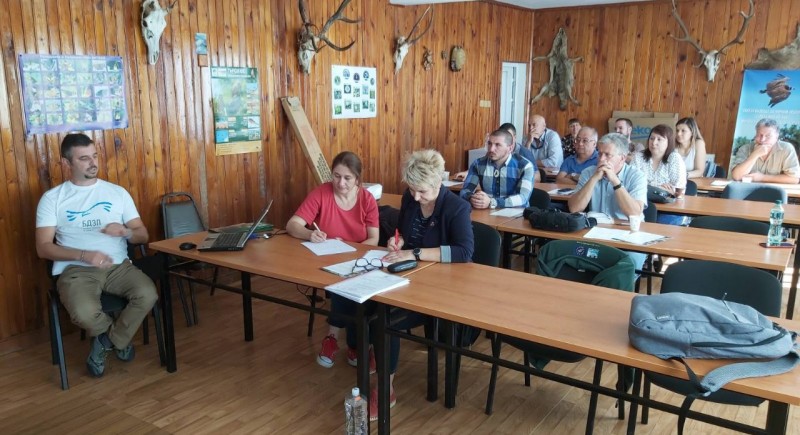 On October 3rd, a meeting with breeders from the region was held in the building of the State Forestry in Svilengrad with the main focus on the human-predator conflict. Wolf attacks on livestock pose a real danger of the illegal use of poisons, which in turn is a threat to all of nature and in particular to a number of endangered species such as the Imperial Eagle.

Particularly alarming is the trend of adult bird replacement in pairs. Only in Sakar in 2019 the number of replaced eagles is 32% against 8-9% nationwide. The poison is the most likely cause of the loss of adult birds in the region. The illegal use of poisonous baits in the wild is a major threat to the populations of birds of prey around the world, and a number of measures are being taken to combat it, one of which is the use of anti-poison dog units. The only such team in Bulgaria is from the BSPB, and during the meeting, the handler Nikolay Terziev and the dog Bars made a search demonstration for a dead animal.

The meeting was organized by RIEW - Haskovo and was attended by BSPB representatives from the projects "LAND for LIFE" and "Conservation of black and griffon vultures in the cross-border Rhodope Mountains", Green Balkans, Sakar Nature Park, Southeast State Enterprise - Sliven, Forestry in Svilengrad, local hunting and fishing society, border police and others. The most effective way to mitigate the human-predator conflict was also discussed. This includes amending legislation and introducing adequate compensatory measures to ensure fair compensation for livestock farmers who lost their livestock as a result of wolf attacks.