Buy a home for the Imperial Eagle - "Bulgaria donates" 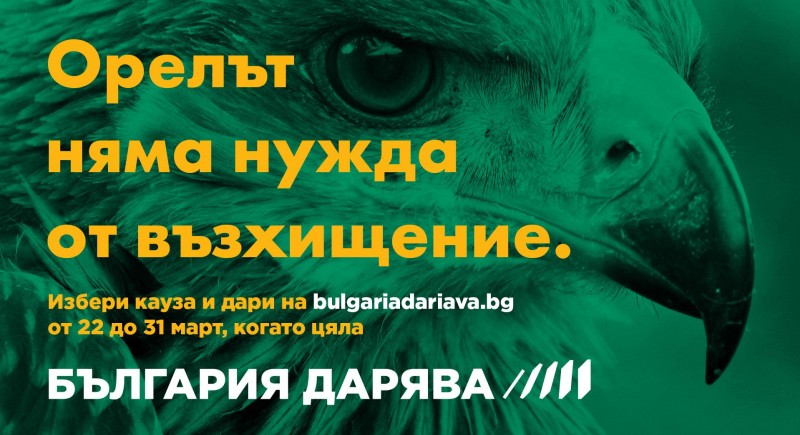 With the coming of the spring for the first time in Bulgaria started the initiative "Bulgaria donates", which brings together causes from the whole country and different spheres of life. From March 22nd to March 31st, when all of Bulgaria donates, everyone can choose and support the cause they believe by donating to the change they want to make a reality.

The cause of the Bulgarian Society for the Protection of Birds is the purchase of land in Sakar and its restoration for the protection of the globally threatened Imperial Eagle. One of the most serious threats to the species is the degradation and ultimate loss of natural habitats. There is a tendency to plowing and conversion of some of the most significant for the Imperial eagle territories managed as grassland, arable land, vineyards and orchards (the region around Sliven, Sakar, Derventski vazvishenia, Zapadna Strandzha). The numerous compact  souslik colonies are destroyed and some Imperial eagle pairs are deprived of their food resources, which could lead to the departure of the territories.

Buying land in Sakar and restoring it contributes to the conservation of the European souslik and other species, which are an important nutritional resource for the Imperial Eagle. The restoration of former pastures leads to the creation of a mosaic nature - to the preservation of biodiversity in general.

“Bulgaria donates” is the first of its kind nationwide initiative to promote and encourage donation. It gives equal opportunities to small and large nongovernmental organizations across the country to present their cause on the free platform bulgariadaviava.bg. It has 115 causes. They await the generosity and empathy of many people from all over Bulgaria. Only in this way can we show that change is possible and depends on all of us.