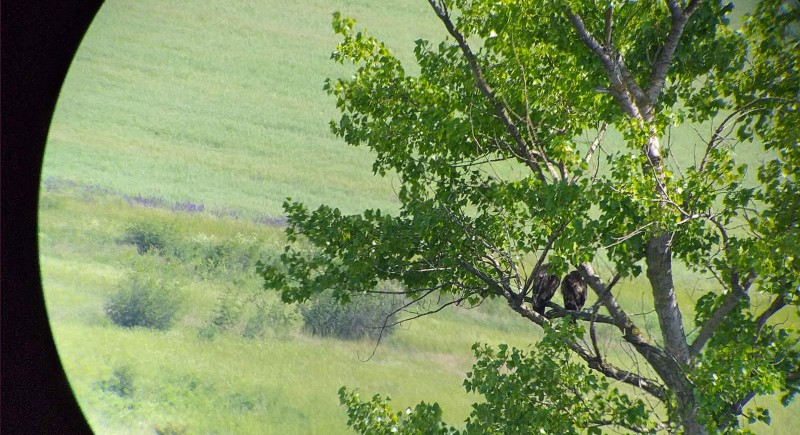 Once again for the last few months, the number of the Imperial Eagles pairs in Bulgaria continues to grow! Days after announcing the new record of 34 pairs, a team from the Bulgarian Society for the Protection of Birds (BSPB) discovered a new one in the Yambol region. With it, the population of the globally endangered species in our country has reached 35 pairs!

"The reason for the increase of the nesting pairs of Imperial Eagles with 6 new ones is the purposeful and long-term efforts of BSPB and other environmental organizations, as well as the partnership of BSPB with Elektrorazpredelenie Yug for the isolation of over 3000 pillars in key habitats of the species. Along with the insulation of power lines, the installation of artificial nests and the guarding of risk nests by volunteers have contributed to the growth of the Bulgarian population of the species” said the Raptor Conservation Officer from BSPB Dr. Dimitar Demerdzhiev.

The newly discovered pair is made up of young, two-year-old birds that have occupied territory but have not started breeding in this first year. Near their territory, there is an artificial nest placed by a team of the project "Land for LIFE", which is possible to be occupied by the young family during the next breeding season. The data so far have shown that a total of 32% of the species' population in the country occupies artificial nests and this has proven to be one of the most effective conservation activities for the conservation of the Imperial Eagle.

"Indications for the possible presence of a new pair in this area were the floaters observed in previous monitoring, as well as the presence of neighboring pairs. The new pair has chosen an area with a dense European souslik colony - one of the main food resources for the species," added Dr. Demerdzhiev.

The main challenges facing the Imperial Eagles in Bulgaria are related to the loss and degradation of nesting and foraging habitats, the restoration of which is the main goal of the BSPB LIFE project “LAND for LIFE”. The huge efforts made by Elektrorazpredelenie Yug to reduce the mortality from contact with dangerous power lines are also the reason why the project "Life for Safe Grid" was nominated for the LIFE 2020 AWARD. The continuation of the realization of these activities is the key to the salvation of the emblematic species in our country.