Another record for the Imperial Eagle in Bulgaria this year 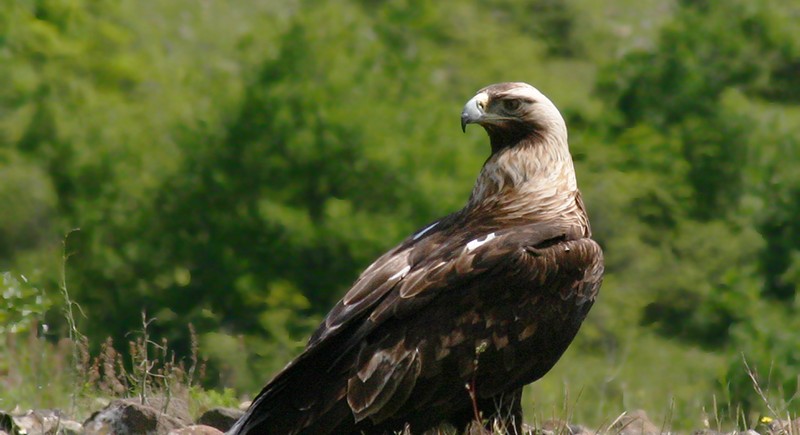 The number of hatched juveniles Imperial eagles during this breeding 2020 season is 37. This is another record for the species in our country this year. During the monitoring of the Imperial eagles' pairs in the country, which took place a few days ago, it became clear that the juveniles are 37 out of 26 pairs that have started breeding. For comparison, in 2019, out of the 29 pairs of Imperial eagles, only 19 started nesting, which successfully raised 26 young birds.

It is still too early to say how many of these 37 newly hatched eagles will successfully leave their nests by the end of the summer, but the fact is a huge success for the Bulgarian Society for the Protection of Birds and great satisfaction for the efforts made over the years for the protection of the species in the country.

We remind you that in the last two months, we announced the discovery of new pairs of Imperial Eagles in Sakar and the region of Sliven and Yambol, which increased their number from 29 last year to a record 35 at the moment. This increases the territories occupied by the Imperial eagle in the country.

In just three months, 6 new pairs of the species were discovered. The reasons for 2020 to become a year of record numbers for the globally endangered Imperial eagle are many. BSPB's partnership with Elektrorazpredelenie Yug for the isolation of over 3,000 poles in key habitats of the species, along with the security of power lines, the construction of artificial nests and protection of risk nests by volunteers contributed to the growth of the Bulgarian population of the species.

In the last 4 years, 40 artificial nests have been installed under the “LAND for LIFE” project, helping young Imperial Eagle pairs to start nesting in unoccupied but suitable breeding territories, or helping already breeding pairs to choose a safe and secure nest.

A total of 32% of the population of the species in the country occupies artificial nests and this has proven to be one of the most effective conservation activities for the protection of the Imperial Eagle. In the near future, we expect to have an effect from the other activities of BSPB for the protection of the species, which include the restoration of pastures in areas where the Imperial Eagle is found in our country, to provide natural places for hunting and enough food.

Over an area of ​​28 decares, 1,700 poplar and oak trees have been planted over the years, hoping that in time they will shelter nests of Imperial eagles in their crowns. The restoration of forests along rivers and streams is done because there are no suitable nesting places for the species in the country, as in the last 15-20 years as a result of mass felling of poplars the nesting habitats of the Imperial Eagle have been damaged.

These and many other conservation activities to improve and / or restore the species' breeding and foraging habitats contribute to the better conservation results we have been looking forward to recently.

The regular monitoring of nesting pairs of Imperial Eagles in Bulgaria is part of the conservation activities carried out by BSPB within the LIFE project "LAND for LIFE", whose main goal is to restore and improve the foraging habitats of the globally endangered species.