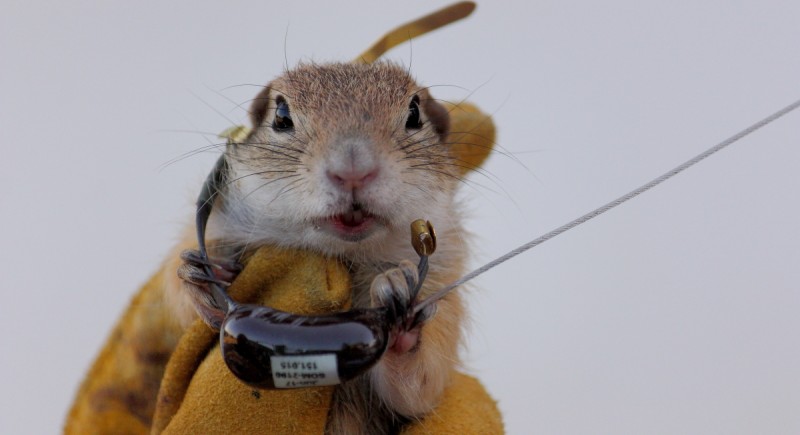 The fate of endangered animals after conservation reinforcement often remains unclear. In order to trace the path of the relocated European sousliks to the last remaining colony of the species in Zapadna Strandzha Special Protection Area, the team of the LIFE project "LAND for LIFE" equipped them with radio collars. Each device transmits a specific radio signal for more than 2 months, which can be detected by an antenna and thus determine the location of the animal.

The collars weigh between 7 and 11 grams, which is less than 5% of the weight of the animals themselves and does not hinder them in any way. The study showed that the sousliks settled near the release site, with an average settlement distance of just over a hundred meters. At the same time, however, they embark on longer wanderings, which reach up to 700 meters. These observations are supported by other studies on movements in this species and emphasize the need to set aside significant areas when planning future similar activities.

At the end of the active season in September 2020, the animals were caught and the collars were removed. It was found that 2 months after release, 79% of the animals were alive and in good condition. The main cause of death was predation by birds of prey.

The attached maps show the places where the sousliks released in 2017 and 2019, respectively, were located. It is clear that in 2019 they did not move significantly away from the place of release marked with a red star. It is located about 200 meters away from the place where the animals were released in 2017 (marked with a yellow star) in order to avoid direct competition with individuals moved in previous years. A quarter of all localizations for 2019 (127 out of a total of 497) were within the boundaries of the land purchased by BSPB. This confirms that the criteria for the team to choose the place coincided with those of the sousliks and it is happy with its new inhabitants.