Serious loss of habitats of the Imperial eagle in Bulgaria 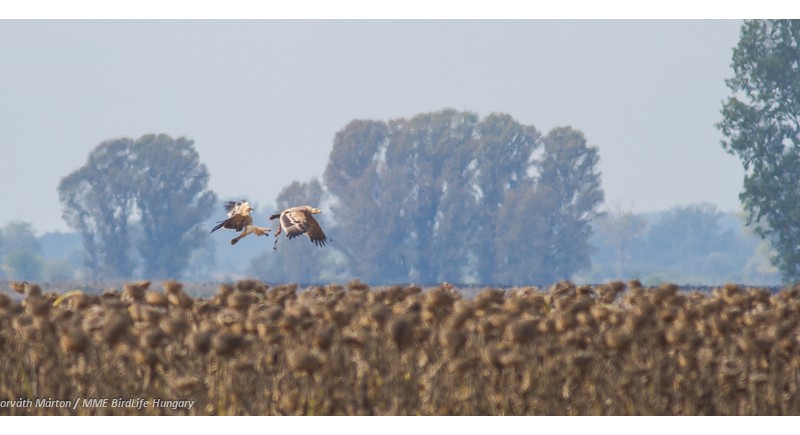 BSPB conducted a study of land use in 24 breeding territories of the Imperial eagle in Bulgaria and found a serious loss of key habitats for the species.

The survey was conducted within the LIFE project "LAND for LIFE" in the period 2014-2019 and repeats our previous surveys conducted in the same areas in 2001-2006 and 2007-2013. The results show an alarming trend for the last 15 years - the extremely important grassland habitats for the Imperial Eagle have halved compared to the period before Bulgaria's accession to the EU (2007). While permanently grassed habitats accounted for 21.02% of the area of ​​inhabited breeding grounds by Imperial Eagles as of 2006, by 2019 they accounted for only 9.14% of this area. This major change is related to the payment of agricultural subsidies per unit area. Thus, due to gaps and inconsistencies in the legislation, large grasslands, managed as extensive pastures for more than 20 years, have been plowed and turned into arable land, even if the soil and climatic conditions are not suitable for this intensive type of agriculture.

Most of these biodiversity-rich areas fall into Natura 2000 protected areas. An additional threat to the Imperial Eagle is the practice of "clearing" pastures overgrown with bushes using shredders and bulldozers. In this way, the populations of a number of animals that are a priority for conservation or are an important food resource for the Imperial Eagle, are directly destroyed or deprived of their habitats, which in the future will have an extremely negative impact on the state of the species. The Imperial Eagle feeds and hunts mainly in different types of grasslands, where it catches mammals of various sizes, mainly fallow European souslik and Hedgehogs, as well as reptiles and birds.

We recall that the intensification of agriculture is a major reason for the loss of biodiversity globally. Birds, mammals, reptiles, amphibians, and insects throughout Europe are suffering catastrophic declines due to harmful agricultural practices. Now, Europe’s leading scientists have come together to urge the EU to reform the destructive Common Agricultural Policy (CAP) and stop the often irreversible eradication of nature and directly affects people.

Through the LIFE project "LAND for LIFE" BSPB and the project partners, farmers from Natura 2000 areas where the Imperial Eagles breed work for the restoration and sustainable management of pastures. This is done by reviving traditional grazing livestock, restoring stables and herds of domestic animals, restoring plowed pastures, and partially removing shrubs to restore mosaic habitats.