International Campaign for the Protection of Migratory Birds: “Flight for Survival” 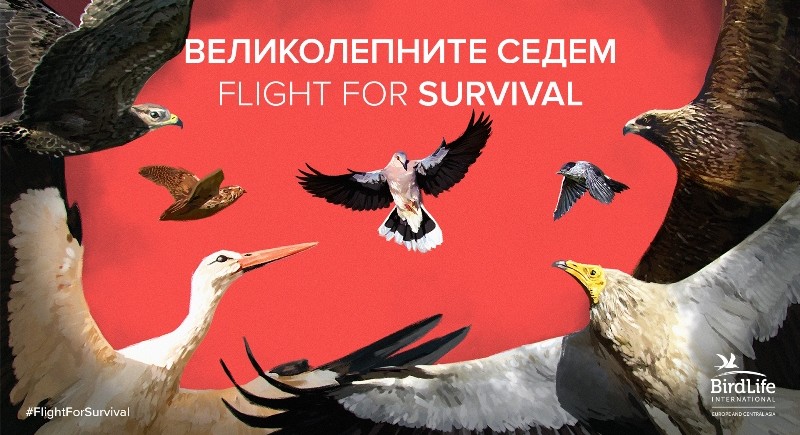 Shooting, trapping, poisoning… Every year, an average of 25 000 000 birds are unlawfully shot, trapped or poisoned, from the smallest songbirds to the most powerful birds of prey. Endangered species, already hit hard by habitat loss and climate change, are being pushed closer to extinction – and all in open defiance of the law. Through the BirdLife partnership, this campaign highlights over 15 000 km of conservation action, from the south of Africa to the north of Europe. BSPB is the leading organization in the international campaign to present the threats to the Egyptian Vulture and the conservation activities within the LIFE project “Egyptian Vulture New LIFE”.

The trapping of small songbirds for food is common across the Mediterranean. In Cyprus, the illicit restaurant trade of blackcaps – worth 15 million euro – is driving the illegal slaughter of hundreds of thousands of migratory birds each year.

This rare dove is spiraling towards extinction across Europe, yet it remains the target of illegal shooting in the Mediterranean. In Greece, over 70 000 turtle-doves are estimated to be slaughtered each spring on the Ionian Islands alone.

Sadly, this beautiful bird is regarded as a trophy target by many poachers. In Lebanon alone, thousands are illegally shot every year as huge flocks cross the country during migration season.

Globally threatened due to severe habitat loss, this powerful bird of prey is also badly persecuted by humans. In Hungary, targeted poisoning poses one of the main threats to this rare eagle’s survival. In Bulgaria BSPB will present the main threats to the Imperial eagle and the conservation activities within the LIFE project “Land for LIFE”.

Having suffered a dramatic population decline, this rare vulture is now globally endangered. In the Balkans, wildlife trafficking has added to the death toll from poisoning, electrocution and illegal shooting.

In the past, up to 5000 honey-buzzards were illegally shot every year as they passed through Italy’s Messina Straits. But local and national conservation action since the late 1980s resulted in a dramatic drop in poaching numbers, showing that change is possible.

You can save and protect threatened migratory birds along the African-Eurasian flyway with a donation to BirdLife International’s Flight for Survival campaign.

“Flight for Survival” is a campaign created by BirdLife Europe & Central Asia to raise awareness about the illegal killing of birds in Italy, Croatia, Cyprus, Greece, Egypt, Lebanon, Hungary and Bulgaria, and their conservation activities to fight this. The story lines of this campaign are heavily inspired by the information available on the migration habits of the selected birds.