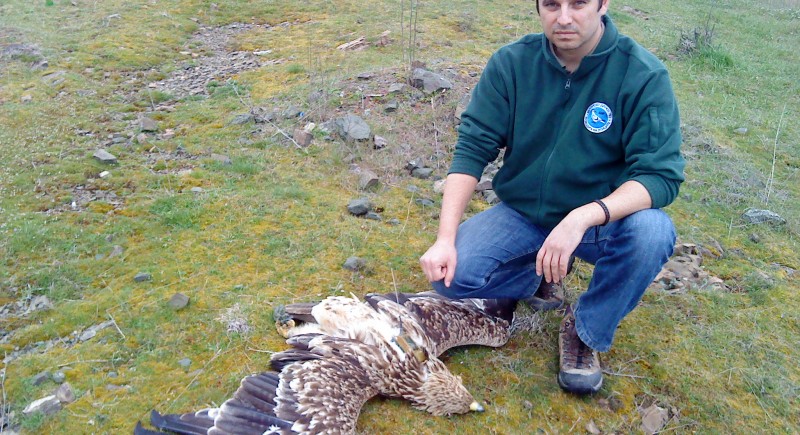 Ornithologists from the Bulgarian Society for the Protection of Birds have ascertained new partners in seven of the 28 pairs of Imperial Eagles in the country. This is the biggest change of partners among the nesting Imperial eagles in recent years in Bulgaria. The most likely cause is the death of one of the birds in the previously formed pairs.

These results contrasted with the record low mortality rate for nesting eagles in 2016, barely 3.77% - the lowest for the past 10 years.

"Near one of the nests of Imperial Eagle, located in the valley of the Tundja River, in February we found one of the birds dead. There are two birds in the nest today and they are already incubating. The dead Imperial Eagle from the pair in the area is now replaced by another individual" says Dr. Dimitar Demerdzhiev, who closely follows the status of the Imperial Eagle in Bulgaria.

According to experts, the same happened with two more pairs whose nests are located in the Sliven area. Last year the bodies of two adult birds were found in the area, which most probably died from an electric shock. The assumptions are that the fate of the other four pairs with new partners is the same.

The results of the recent observations of the nesting Imperial eagles in Bulgaria carried out under the project "Land for Life" show that 23 of the 28 couples in Bulgaria are already incubating.

The experts say that for the last three years there has been no change in the number of breeding eagles in our country. This is a disturbing fact because the number of the pairs is expected to increase.  Unfortunately, this cannot happen due to the high mortality rate in both young and old individuals – mostly because of electric shock in electric poles of the power distribution network, as well as by illegal shooting and poisoning. The loss of food and nesting habitats also has an adverse impact because it limits the possibilities for population growth and often leads to the loss of hunting grounds around the existing nests of Imperial eagles. This year, one of the well-known pairs in the Natura 2000 zone "Derventski vazvishenia" disappeared, but a new pair in Sakar was discovered.